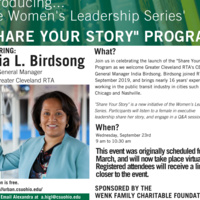 Join us for the launch of the "Share Your Story" Program. This event features India L. Birdsong, CEO & General Manager of the Greater Cleveland Regional Transit Authority (GCRTA). Birdsong joined RTA in September 2019, and brings nearly 16 years' experience working in the public transit industry in cities such as Chicago and Nashville. We will also be joined by Dawn Tarka, who serves as Associate Counsel at RTA and sits on the Center for Public and Nonprofit Management's Women's Leadership Advisory Committee.

The "Share Your Story" Program is a new initiative of the Women's Leadership Series. Participants will listen to a female in executive leadership share her story, and engage in conversation.