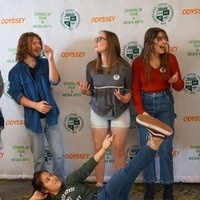 Illustrated by clips from classic and contemporary films, this workshop examines the building blocks and techniques that make up film language. By doing so, students will better understand how filmmakers construct a film shot-by-shot, and how filmmakers can better elicit various emotions and psychological responses from their viewers. The workshop will culminate with students watching a portion of a film and identifying any of these techniques they recognize and their overall effects.

Instructor: James Denny has been teaching film history and analysis courses at Cleveland State University since 2006. He earned his Master of Arts in Applied Communication Theory and Methodology from CSU, writing on the difference between black-and-white and color film footage in terms of the effects on audience emotion. James has co-authored various papers on film and television including those exploring character movement in film, the effects of the laugh track in sitcoms, the parallel history of film and video games, and the effects of modern 3-D movies on the audience.