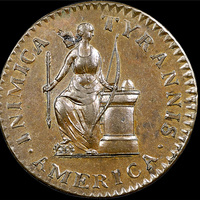 What’s in Your Wallet?: The Imagery of Nation-Building on Early American Currency

What’s in Your Wallet?: The Imagery of Nation-Building on Early American Currency

Money is not just a medium of exchange but also a vehicle for transmitting ethnic and political messages. The imagery on currency is often employed to help build national identities. The presentation explores how different countries experiencing decolonization, both from England and Spain, utilized similar symbolic strategies on coinage and in other media to aid in forging their national images.