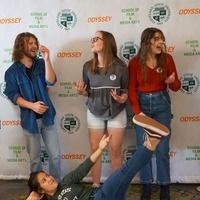 This workshop will introduce fundamental principles about acting and how we learn to perform on-camera. Through a historical survey of techniques from traditional schools of modern acting, students will perform different exercises (such as repetition, gibberish, paraphrasing) from some of the most important teachers of 20th Century Modern Acting, including Sanford Meisner, Stella Adler and Constantin Stanislavski. Using monologues or commercial scripts from film or television, students will get an introduction to on-camera and memory techniques for actors.

Instructor: Ellen Rooney has worked in dance, theater, and film in New York City, Los Angeles and Cleveland and currently teaches acting at School of Film and Media Arts at Cleveland State University, Baldwin Wallace, Conservatory of Music and The Beck Center. She teaches also internationally through various online teaching networks with students in Beijing, Shanghai and Portugal. Previously, she has taught for Hathaway Brown Theater Institute, Shaker Arts Council and Solon Center of the Arts. She has worked many local theater organizations including Near West Theater and Geauga Lyric Theater. Since 2003 Ellen has been member of Women In History, portraying Isadora Duncan, Joan Rivers and Dorothy Fuldheim. She has Master degrees in Dance and Performance Studies from Tisch School of the Arts, New York University, and a Ph.D. in Theater from Bowling Green State University, Ohio.