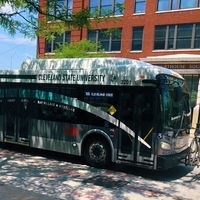 Dr. Floun’say R. Caver, Interim CEO of the Greater Cleveland Regional Transit Authority, discusses trends in public transportation in the Greater Cleveland region. A proven business strategist and performance leader, Dr. Caver successfully blends academic, financial, and operational expertise in his work. Dr. Caver holds a BA in Management from Hiram College; a Master’s of Public Administration from the Levin College of Urban Affairs at Cleveland State University; and a Ph.D. in Public Affairs from The University of Texas at Dallas.

Prior to be named Interim CEO of the GCRTA, he was the Chief Operating Officer/DGM-Operations. He is also formerly the Hayden District Director, where he was responsible for providing transit service to Cleveland’s east side, and Director of Service Quality, where he led a staff of rail and bus supervisors in providing safe, on-time and customer-focused transportation services. Prior to these positions, he was the Assistant Budget Director/Organizational Performance Leader. He also developed RTA’s Management by Data, Performance Strategy called TransitStat.

Dr. Caver has received many honors and awards, including Crain’s Cleveland Business 40 under 40, Mass Transit Magazine’s 40 under 40, the Distinguished Alumni Award from The Levin College of Urban Affairs at Cleveland State University, The Outstanding Fellow Award from The CSU Leadership Academy and Frank J. Hemphill Award at Hiram College.

He is a volunteer with The Salvation Army in East Cleveland, former board member of The Collaborative to End Human Trafficking and youth coach for Hawken School.