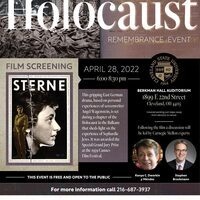 Join us for the film screening of "Sterne" (Stars), as we journey back in time with this 1959 film directed by Konrad Wolf. "Sterne" tells the story of a Nazi officer who falls in love with a Greek Jewish girl while escorting Jewish prisoners through Bulgaria to a concentration camp. The German film won the Special Jury Prize at the 1959 Cannes Film Festival. The movie will be followed by an open discussion.

Free and open to the public